I have had the Anker PowerCore+ 26800 power bank for almost 3 years, and have been happy with it. The only feature I have been missing was a lack of pass-through charging. Pass-through charging is useful when one wants to charge their device of choice (or many) and the power bank at same time. You would only need to carry one wall charger, and would need only one socket. The overall charging power will be, of course, more limited compared to several power adapters. But, for leaving everything to charge over the night it doesn’t matter much. Another case, where pass-through charging is useful, is while using a solar panel as the only power source. The power bank will act as a buffer, and all connected devices will be charging continuously, no matter if a cloud covers the sun.

The time has come

I was unfortunate and left my backpack on the beach too close to the ocean, while swimming. A high wave has decently washed over it, and a little bit of water came inside. My phone and power bank was the only electronics in the backpack. While my water-proof phone was just fine, the power bank wasn’t. Some water has came inside of the power bank through the USB ports. Since the water was very salty, I can imagine that electrolysis took it place at a rapid rate. By the time I could access some tools to disassemble it and clean it out, I have already accepted that it was definitely too late, which it was. If I press a button, then only one LED powers up, which means that the power bank is completely discharged. However the indication is wrong, because it was fully charged. If I try to charge it, then the usual animation with the LEDs appear, but then the animation stops and all LEDs are on, as if it hangs. The current drawn from the USB charger was just 20mA. At least, I got to disassemble the power bank and see how it is built and what kind of components are used.

It was quite hard to disassemble the power bank, since everything is pressed inside of the extruded aluminum case. I have to admit, I have even used a hammer to try to remove the intestines. Eventually, I was able to drag everything out by pulling on the back side.

As promised, the power bank uses Panasonic NCR18650B batteries, apparently, in 2S4P configuration. I could identify some of the components:

I couldn’t find a datasheet or any other information about the controller, except that it is a certified QuickCharger 2.0 IC.

The battery cells haven’t discharged, and are perfectly balanced at 3.925V. The corrosion has occurred mostly around microUSB connector and around one of the battery protection MOSFETs. I have tried to clean the board, and then dry it with the hot air, but it doesn’t seem to help, the same behavior as described before persists.

I have decided not to try to fix the controller board, and instead reuse the battery cells for some of my projects. 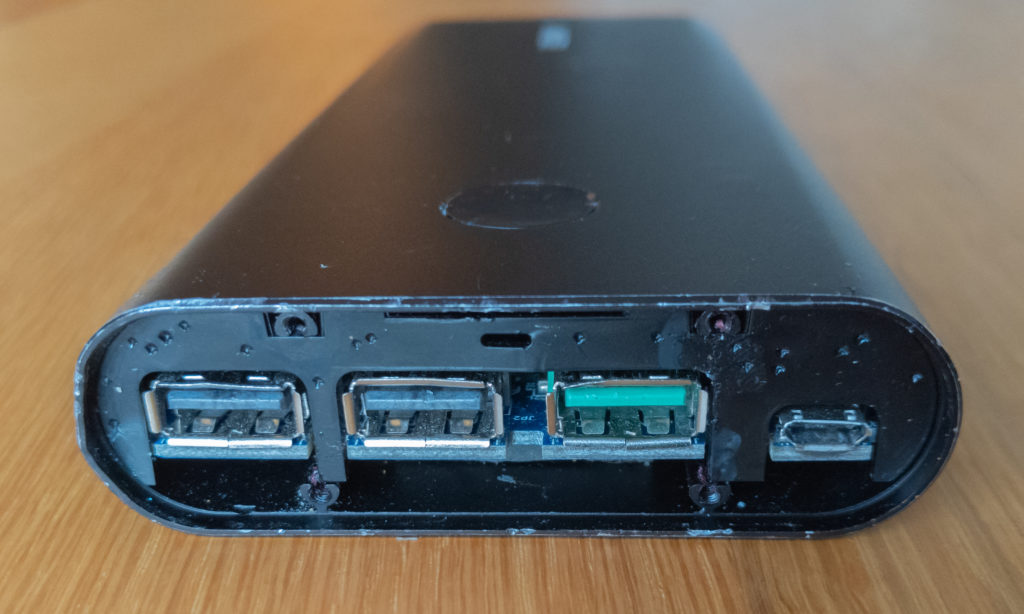 The front of the power bank after the removal of the plastic cover. 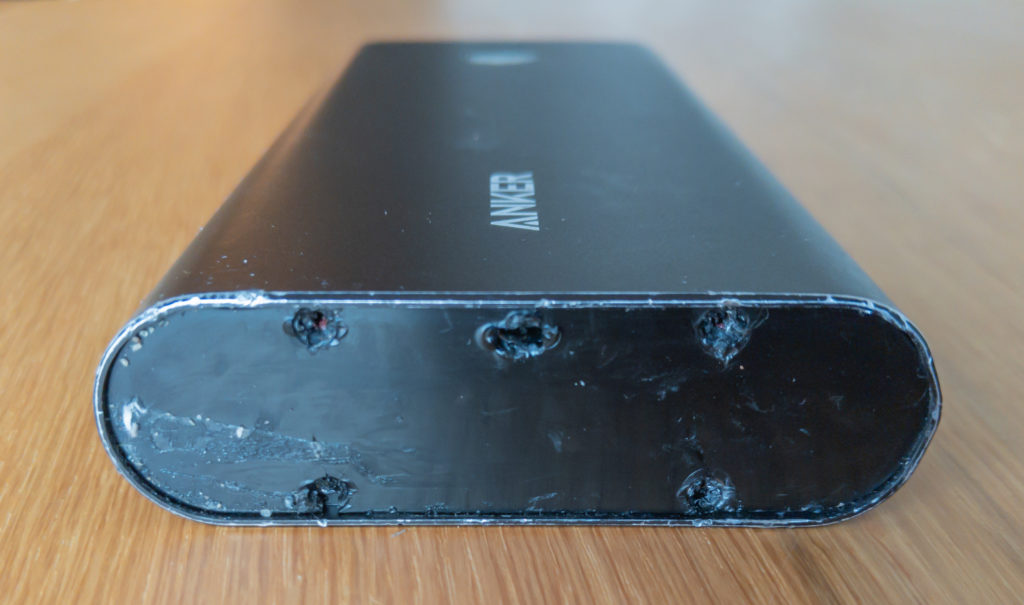 The back of the power bank after the removal of the plastic cover. 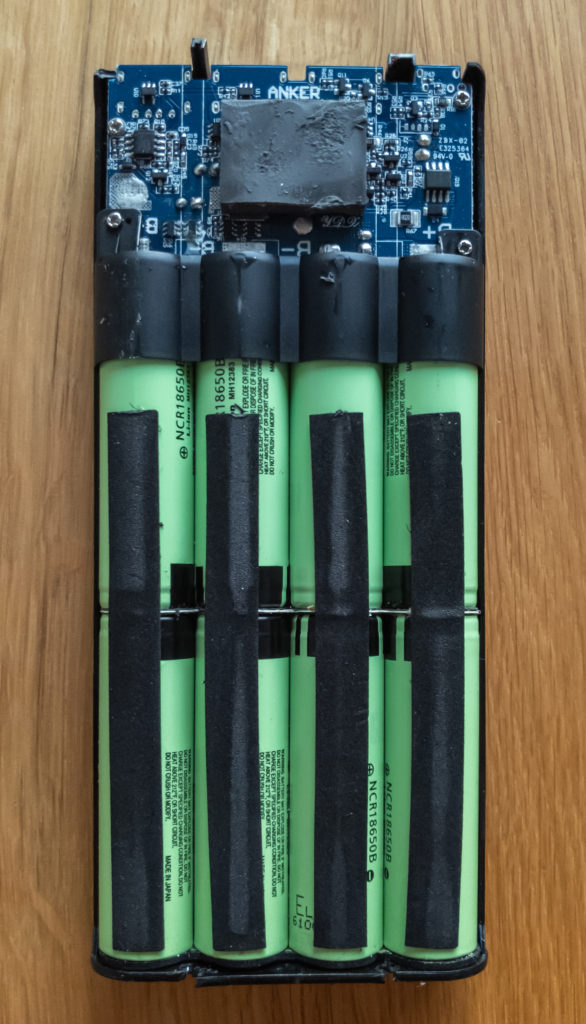 The bottom of the power bank without the aluminum case, note the Panasonic NCR18650B cells. 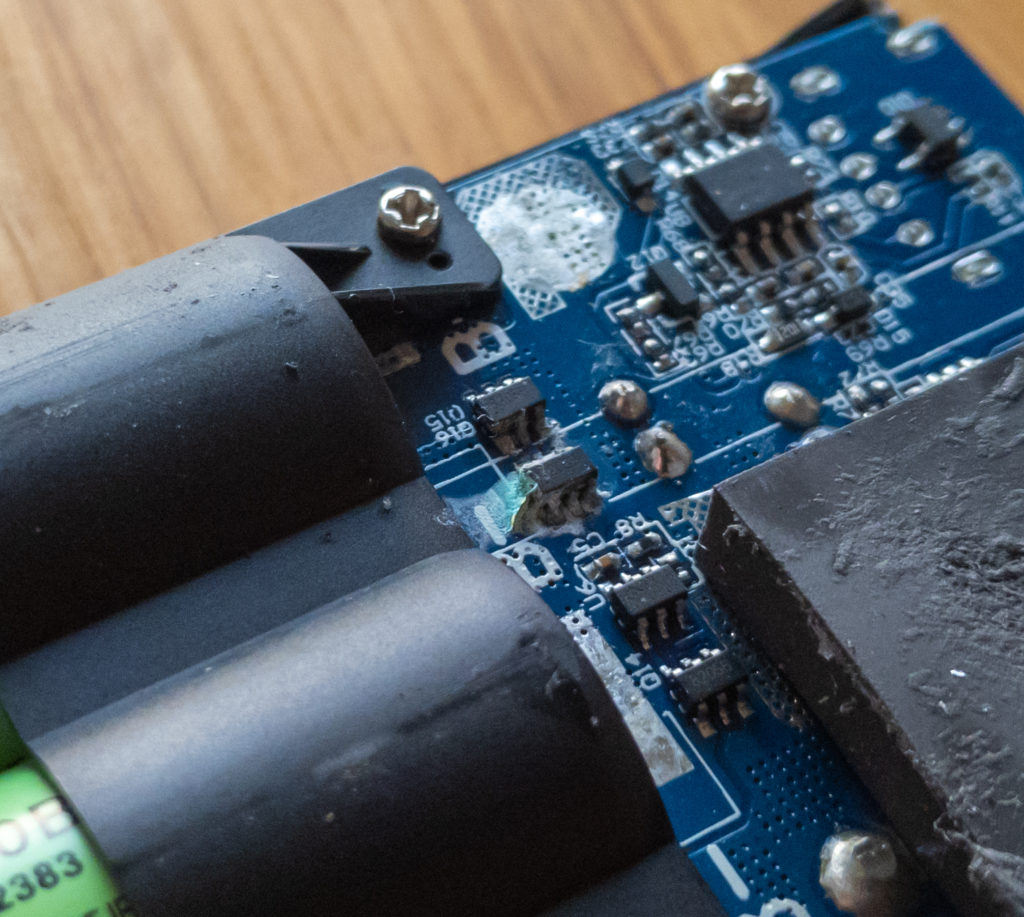 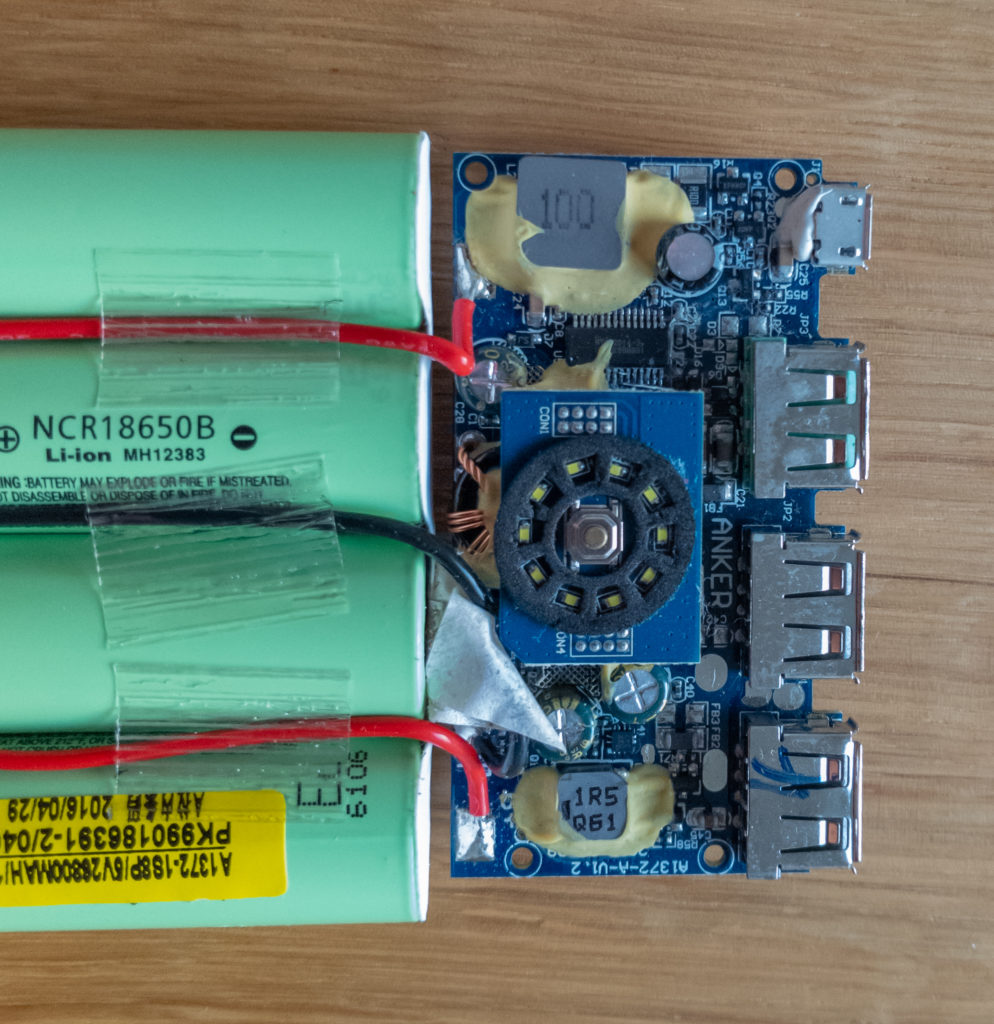 The top of the controller board. 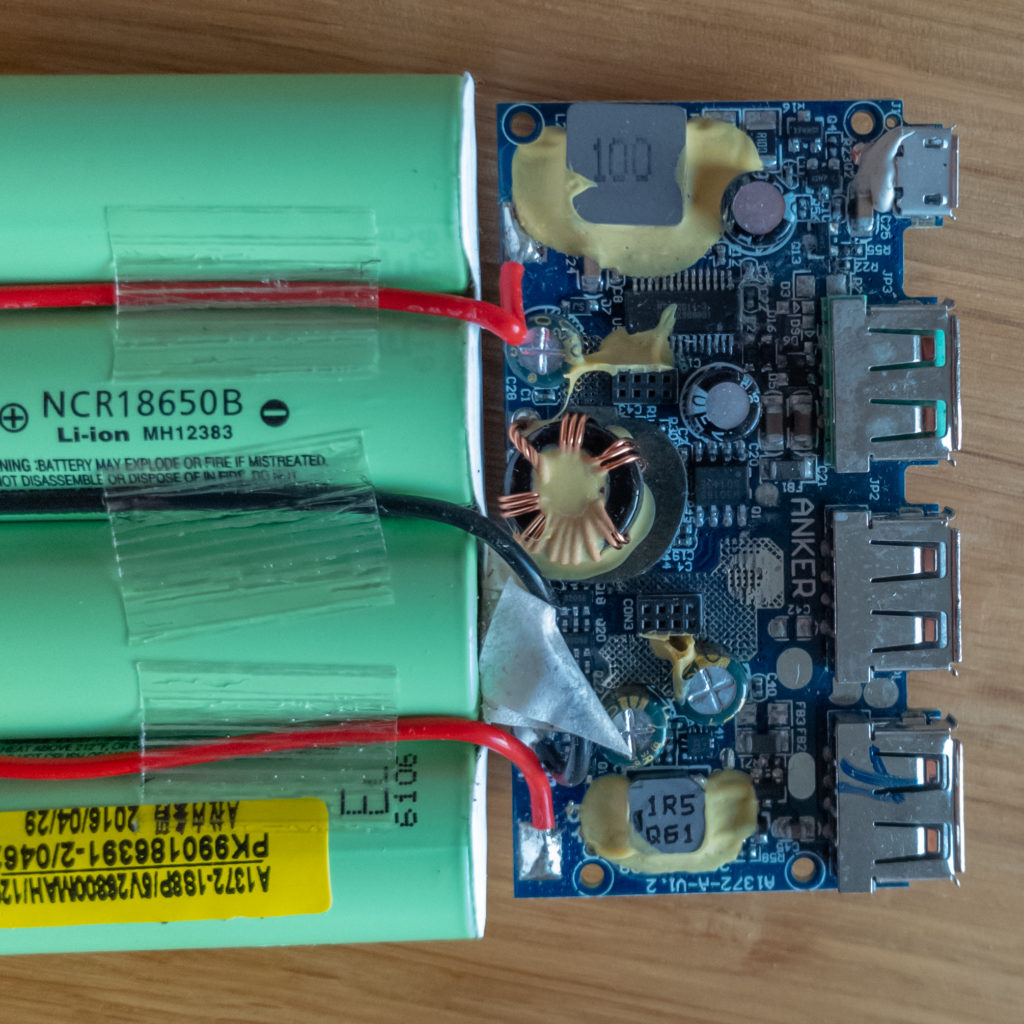 The top of controller board with removed button and LED module. 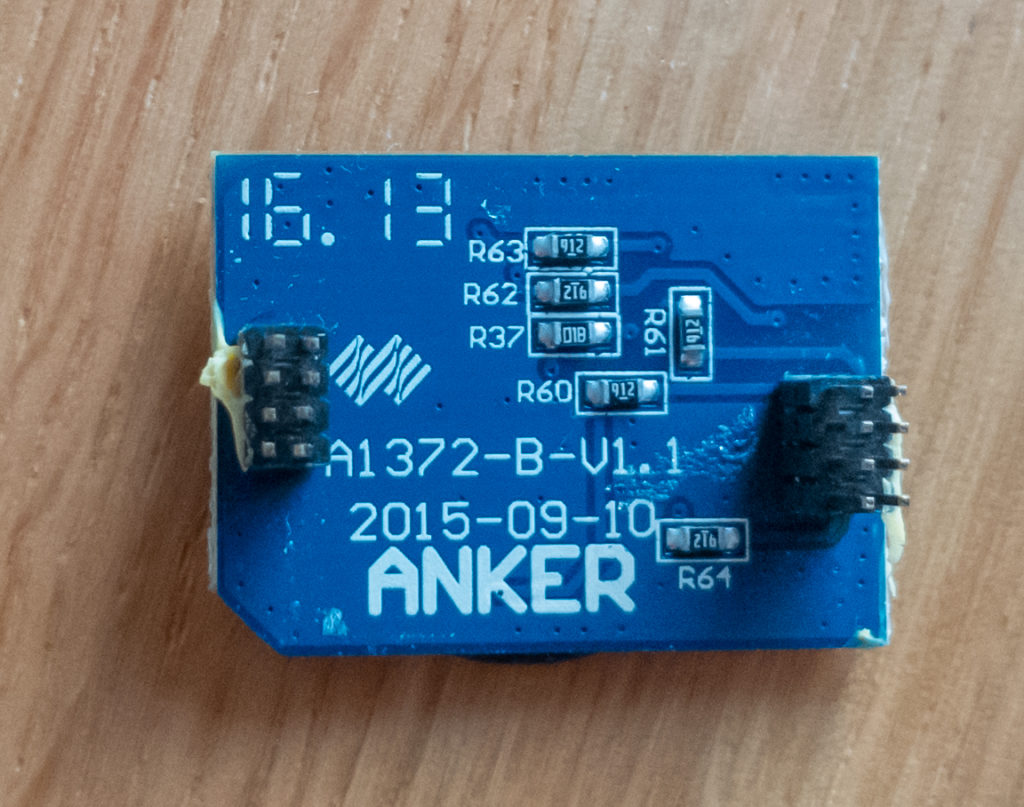 The bottom of the button and LED module. 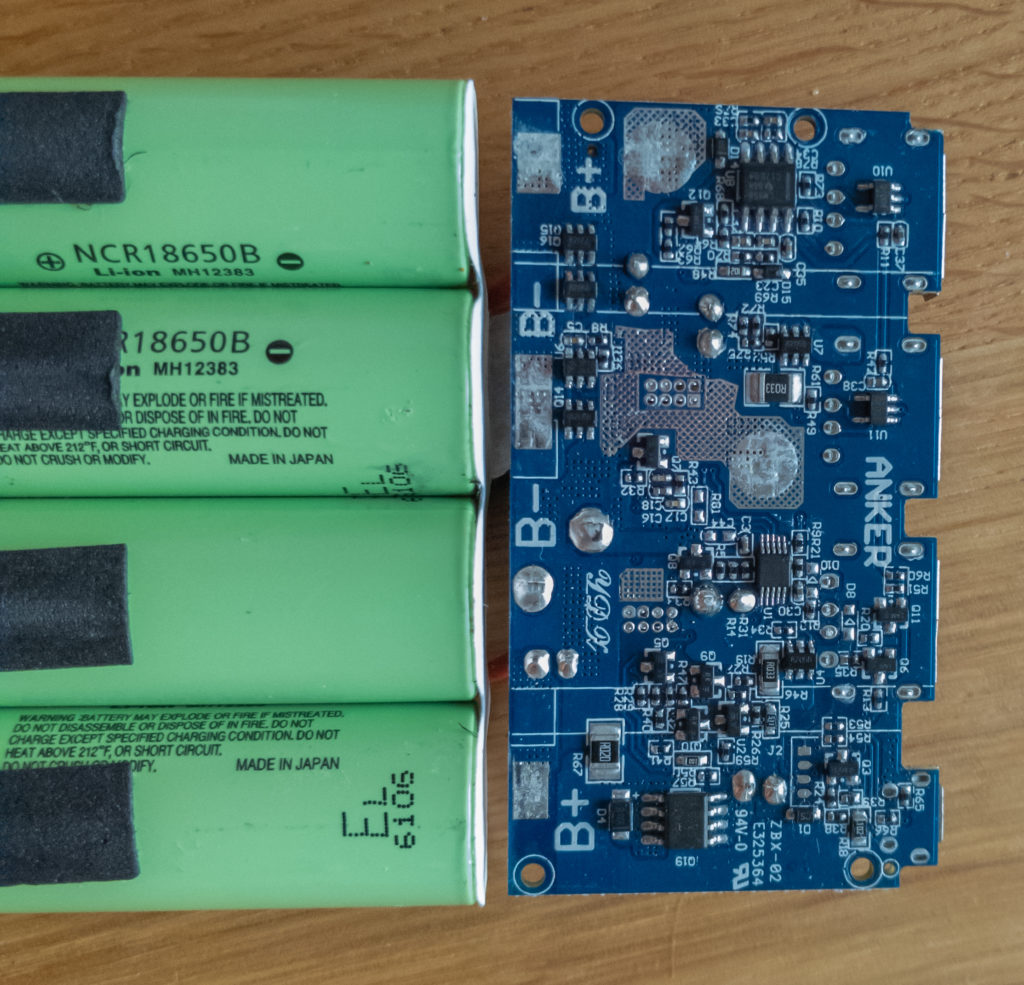 The bottom of the controller board with removed support/thermal pad.